A famous publishing brand is established by mistake

From the New York Times obituary of IDC founder Patrick McGovern, about his first publication:

High demand for his database made him realize that he had found a market himself. In 1967, Mr. McGovern conceived of an industry newspaper he intended to call Computer World News. With a computer conference in Boston looming, he and others put together an eight-page prototype in less than two weeks. Then a last-minute problem arose: A typesetter found that in using a type size appropriate for a publication title, he could fit only “Computer” and “World” in the space allowed on the page, and without a space between. And so Computerworld came to life. 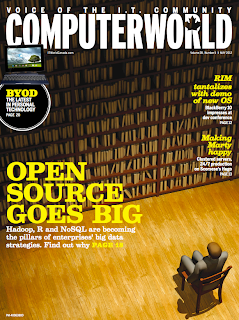 Posted by Unknown at 9:33 AM No comments:

Henry Bloch, founder and former CEO of H&R Block, on an early entrepreneurial lesson (from an interview in Entrepreneur Magazine):

Like so many young entrepreneurs, my brother and I made plenty of mistakes. But I can say with a high degree of certainty, we would not have become as successful as we did had we not made those mistakes and learned from them.

For instance, my brother and I asked our great aunt for a gift of $50,000 to start our venture. She ended up doing us a favor -- she turned us down. Instead, she gave us a loan for $5,000. Had she given us $50,000, we would have failed in a big way. We would have hired a staff to implement a business plan that we later learned was flawed. Without much capital at the beginning, we were forced to start small and, fortunately, to fail small.

My brother and I struggled for eight years before we became successful. We learned a tremendous amount in those years, and I wouldn’t trade those years for anything.