The story of the locked cellphone

This is a personal story of a trivial mistake and its aftermath. I wanted a cellphone; actually, an Android phone that ran on a GSM network and, most importantly, was unlocked so I could buy prepaid SIM cards in any country I went to and use them in the phone. This was my desired solution to avoid the big roaming charges most carriers charge when you leave the country.

I had a trip to Mexico City and planned to do my shopping there. My colleague brought me to downtown, near Plaza Zocalo, and we found a raft of cellphone vendors. We picked one and started shopping. I told my colleague what I wanted, and he conducted the transaction in Spanish. They had a used phone for about $120. Android? yes. Did it work? Yes. Was it unlocked? Of course!

They demonstrated the phone by inserting a SIM card, messing around with the web browser and an app so I could be assured it worked. I was ready to buy. One more question: was it unlocked? Oh, yes!

I felt very happy with my purchase. I bought a SIM card in Mexico and the phone worked fine. And then, I brought my phone to the UK a month or so later, and... it didn't work. I tried several SIM cards and couldn't get the phone going. Where did you get this phone? I was asked. Mexico. OK, that explains it.

It was locked. After all that. I was thousands of miles from the guy who sold it to me. (As if I could even find him again.) As I pondered my mistake, I realized I could have made sure the phone was unlocked, at the shop in Zocalo, by simply asking them to test it with SIM cards from several different carriers.

But that couldn't help me with my current problem - which is that I have a cellphone that works great in Mexico, where I go a few times a year, but nowhere else.

There is a silver lining to this story, and that's what I wanted to share. I actually use the phone every day, just not for its intended purpose. I had been looking for a device other than my main phone that I could use to play music from the cloud. I considered buying a tablet, but eventually I realized I had the Mexico phone. Even if it couldn't connect to the cell network, it worked with wifi, so I could use it at home. It was Android, so it could access my music apps. A perfect solution.

So, the point is this, and I have learned this again and again. Very rarely is a mistake or failure a total loss. If you take the time to look for it, there is residue that you can use for other purposes, or take forward to your next project. When you buy a phone that ends up being locked, it's not so bad - you are instead the owner of a somewhat overpriced music player.
Posted by Unknown at 1:30 AM No comments:

Ben Greenman of the New Yorker shared a cool rejection letter that U2 received in 1979: 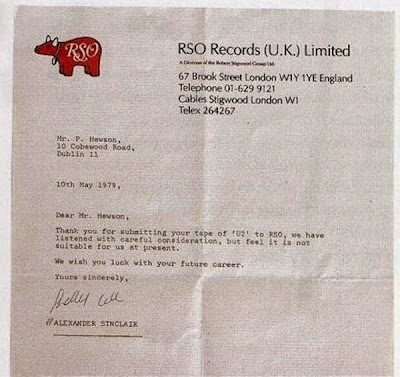 It's from the Robert Stigwood Organisation, who may have been best known as the Bee Gees' label. Somehow Paul Hewson (now better known as Bono) and the boys overcame that setback.
Posted by Unknown at 2:22 PM No comments:

A Harvard Professor bounces back from academic probation

This story is from Tom Eisenmann, professor at Harvard Business School, and is part of a longer post called "Failing Better."

I was up for promotion at Harvard Business School. Like most universities, we have a “publish or perish” promotion process. If you don’t publish compelling research, and plenty of it, you perish. Promotion odds at my school are low: three out of four new professors eventually get fired. So, I was facing the same odds of failure as a typical entrepreneur.

I thought I was in good shape. I was studying internet companies, and a publisher had paid me a big advance for a book about this hot new phenomenon. But the senior professors who reviewed a draft of my book and my other work saw things differently. They said my research seemed like it was done in a hurry; it had a lot of intellectual loose ends. That was ironic, because my book was titled Speed Trap. The book analyzed mistakes that many internet companies made by growing too fast.

My boss told me that I wasn’t being fired — at least not immediately. Instead, the School would put me on probation and give me two more years to try to improve my research. But he added, “There are no guarantees that this will work. You should think about whether you are cut out for this job, and you should seriously consider leaving academia now. You’ve got plenty of good opportunities in the real world.”

I was shell-shocked. You may be familiar with the five stages of grief: denial, anger, bargaining, depression, and gradual, grudging acceptance. We experience these stages when we confront impending death or some other extreme, awful fate. The risk of getting fired after spending seven years trying to reach my goal seemed truly terrible. So, I passed through the five stages of grief. I lingered at anger.

But...I knew that I still loved my work. I resolved to not run from my failure this time. I would try to learn from my setback, even though that would expose me to the risk of future failure. My book was finished but not yet printed. I told my publisher to cancel my contract. I gave them their money back, and I kissed goodbye to a year’s worth of work. I put my head down and cranked out better research. I lived on edge for two years, but I got promoted. The pain was temporary, but worth it.

If you want to fail better, accepting risk is just half the battle. The other half is learning from our mistakes. As Henry Ford said, “The only real mistake is the one from which we learn nothing.”

Posted by Unknown at 1:48 PM No comments:

Email ThisBlogThis!Share to TwitterShare to FacebookShare to Pinterest
Labels: academia, bouncing back, story

A real-life example of journaling and reflection This is an excerpt from the new book "Leading the Life You Want: Skills for Integrating Work and Life," by Stewart Friedman of the University of Pennsylvania Wharton School. It's a very useful example of how one person has created a life habit of journaling - and of reviewing the journal regularly to assess progress and plan for the future. Check out an online journaling and reflection tool at 3MinuteJournal.com

It's still dark outside when Tom Tierney rises in his home outside Boston on a December morning. He dresses quietly, so as not to wake his wife, Karen, and goes to the kitchen to brew some coffee. At fifty-nine, Tierney is trim and retains a certain boyishness, helped by the rimless glasses, a full head of hair, and boundless energy. He carries a mug and the fresh pot into his office and closes the door. It's 5:15 a.m., and time to begin the ritual of writing what he calls his "annual review."

The term reflects Tierney's lifetime in business: the Harvard MBA, two decades at the consulting firm Bain & Cimpany (including eight years as chief executive), and fourteen years as cofounder and guiding spirit of the nonprofit Bridgespan. But he doesn't write this personal document with the notion that it should be legible for anybody else. "It's just for me," he told me in a long interview a few years ago. "I ask how I spent my time. And I ask how I'm doing. And then I ask, 'Where am I going with all this? How can I be better? What are my priorities for the next year? Five years? Ten years?'" The annual review is more than a career assessment; it might include personal goals or thoughts about how his two sons are doing. The ritual reflects the qualities that Tierney is known for: discipline, self-reflection, an ability to think big and creatively, and a dedication to personal development, his own and others'.

As he works, he goes back through journal entries that he's written on cross-country flights and in other spare moments. Tierney, who has been journaling for decades, believes the practice helps him record meaningful data. "I keep track of every single travel day, of every day that I'm home after seven, and of how many nights I'm away and what's causing that." But it also helps him think through bigger life questions, track his progress toward long-term goals, and capture ideas and dreams about what might be.
Posted by Unknown at 10:00 AM No comments: