From "This Idea Must Die: Scientific Theories That Are Blocking Progress" by John Brockman, a collection of answers from famous scientists and thinkers to the question: "What scientific idea is ready for retirement?" This response is from British writer Ian McEwan:

Beware of arrogance! Retire nothing! A great and rich scientific tradition should hang onto everything it has. Truth is not the only measure. There are ways of being wrong that help others to be right. Some are wrong, but brilliantly so. Some are wrong but contribute to method. Some are wrong but help found a discipline. Aristotle ranged over the whole of human knowledge and was wrong about much. But his invention of zoology alone was priceless. Would you cast him aside? You never know when you might need an old idea. It could rise again one day to enhance a perspective the present cannot imagine.

[Hat Tip Brain Pickings]
Posted by Unknown at 10:42 AM No comments:

Email ThisBlogThis!Share to TwitterShare to FacebookShare to Pinterest
Labels: about mistakes, science

Singer Idina Menzel knows how to live with mistakes

Tony-award winning actress Idina Menzel performed her megahit "Let It Go" as part of the New York Times Square celebration on New Year's Eve. And she was not perfect, resulting in the expected tide of Twitter snark (a brief taste can be found here). But even if her performance wasn't flawless, Menzel's response was perfect: 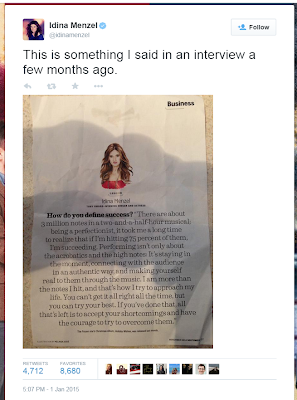 There are about  3 million notes in a two-and-a-half-hour musical; being a perfectionist, it took me a long time  to realize that if I'm hitting 75 percent of them,  I'm succeeding. Performing isn't only about  the acrobatics and the high notes: It's staying in the moment, connecting with the audience  in an authentic way, and making yourself  real to them through the music. I am more than the notes I hit, and that's how I try to approach my life. You can't get it all right all the time, but  you can try your best. If you've done that, all  that's left is to accept your shortcomings and have  the courage to try to overcome them.

As Brene Brown states, you invite criticism simply by "stepping into the arena." Social media amplifies (and dumbs down) criticism - snark is so easy. To accept criticism with grace (even if it doesn't deserve it), forgive yourself, and work on improving is the mark of a true professional. And as Garr Reynolds points out in his discussion of this situation in Presentation Zen, Menzel asserts rightly that authenticity and connection trump perfection.

By committing her high-profile mistake, and most importantly by her handling of it, Idina Menzel has taught something important and useful to all of us.

Posted by Unknown at 3:24 PM No comments: