Even if you have strong capabilities, you still need to sell yourself

A mistake story from Kevin Liles, CEO of KWL Management, as quoted in Adam Bryant's Corner Office column in the New York Times.

I wanted to be the host of a new hip-hop show, and I didn’t get the job. I was the biggest guy in the marketplace. Given what I’d done, that should have sold me. But I didn’t sell myself. So, after that, I realized that no matter what I have done before, I had to learn the art of selling. I had to learn the art of explaining my value proposition when I show up somewhere. How do I differentiate myself? I know who I am. I’m very clear. If I’m meeting someone, I’m very clear about their value proposition, and I know what my value proposition is.

This is very good advice, and something I have trouble doing. I oftentimes expect my resume to sell me. I am proud of my accomplishments and expect that others would see the value in them, and connect it to their needs. But, as Kevin Liles says, that's not enough. I need to understand what they need and point them to what I can do to directly address that need.
Posted by Unknown at 5:30 AM No comments:

A good model can be useful even when it fails

As the rains from Hurricane Sandy fall around us here in Central Pennsylvania, I'm checking out various computer models about the track of the storm, and am reminded about this quote from Nate Silver's great book on predictions, "The Signal and the Noise: Why So Many Predictions Fail-but Some Don't":

The key is in remembering that a model is a tool to help us understand the complexities of the universe, and never a substitute for the universe itself. This is important not just when we make predictions.

This storm tracking graphic is a model. Outside, the rain is falling and the wind is beginning to blow. That's reality.

Source: National Hurricane Center
Posted by Unknown at 8:43 AM No comments:

Advice from world-famous fisherman: strike a balance between staying the course and changing up

My 9-year-old son loves the show "River Monsters," in which fisherman Jeremy Wade tries to catch large predators in the world's rivers. We watched an episode this past weekend in which Wade is trying to catch a large stingray in an Argentinian river. While contemplating repeated failure - something in the river has been stealing his bait over and over again - Wade offhandedly shares some wisdom while he waited for another bite on the line:

Always there's this conflict between, do I carry on doing what I'm doing or do I change something? You have to reach a happy medium with that. You sort of have to give something a good go, but be prepared to change if it looks like you're doing something wrong.

This is useful for people involved in creative work, or innovation. Striking "a happy medium" between pivoting too quickly and staying too long with a failing strategy is crucial to long-term success.

Albert Wenger is discussing how to balance conflicting items like this in his "Scylla and Charybdis" series on his blog Continuations.

The section I refer to begins around the 12-minute mark of the video.
Posted by Unknown at 5:30 AM No comments:

Infusionsoft co-founder Clate Mask on growing with the wrong customers

In 2009, we decided to remove the setup fee in our subscription service. We were on a mission to reach 100,000 small business customers worldwide and I wanted to get there faster. This decision nearly killed Infusionsoft.

Ambitious entrepreneurs will always push hard to acquire more customers, but too often, we push forward in our business growth initiatives without realizing the cost of acquiring the wrong customers. These are the ones who complain often, demand extra resources and erode employee morale. They might add to the top line, but they certainly don’t add to the bottom line—or the balance sheet. Know who your target market is so you weed out these bad customers and protect your bottom line.

We learned this lesson the hard way. For over a year, we watched our cancelations skyrocket and our lifetime customer value plummet. I knew we had to figure out a solution and fast. I couldn’t stand by and watch this decision ultimately lead to the death of Infusionsoft.

What we did was get totally clear on who our target customer is. This is the most important thing you can do to avoid hemorrhaging cash on costly customers. This clear understanding informs every function of the business. Entrepreneurs who don’t invest enough time in this will pay a tremendous price when their growth ambition outstrips their target customer clarity.

I have learned a similar lesson - business customers don't value free.
Posted by Unknown at 3:12 PM No comments:

"Regrets are about the things you wanted to try and didn't"

To me, regrets are not about failures; they’re about things you wanted to try and didn’t. Because I never felt guilty about my choices and my husband was behind me, I was able to do my best.

A poignant note to this quotation is that Wong's husband, died suddenly just after she had reached the CEO level in 2009, at a prior company. Her career success has clearly been a team effort.
Posted by Unknown at 5:30 AM No comments:

How a great leader handles failure

The US sportswriter Joe Posnanski wrote a great piece on Washington Nationals manager Davey Johnson. Posnanski points out that Johnson has won everywhere he's been (New York Mets, LA, Baltimore, Cincinnati, and now in Washington) and that, almost without exception, the teams got worse after he left.

One episode stood out as instructive for leaders wanting to learn how to manage their teams through failure:

I asked a close Nationals observer what Johnson has done so well this year, and he told a little story that has a lot more to do with presence than anything else. In July, the Nationals were a huge surprise … but there were plenty of people who did not expect the winning to last. Washington started a four-game series against the Braves, the team in second place at the time, and promptly blew a 9-0 lead, eventually losing 11-10 in extra innings.

How did Johnson respond? He told the press that he had managed the worst game of his life. He could not believe how bad he had been as a manager. "Obviously, when they score 10 runs, that's my fault," he said. And "I've got to live with it."

When Posnanski uses the word "presence" he means composure, self-awareness, and perspective. A loss, even a devastating loss, was merely one game out of 162. Johnson's team is young. If he lost his composure - if he overreacted to this one game - it would send the wrong message to this team, that an embarrassing loss is somehow more meaningful than any old loss. By taking the blame, he opened space for the players to forgive themselves and move on.

Johnson's motto, keep yourself "not too high, not too low," can help every leader.

Welcome news from Finland - the third annual International Day for Failure is this Saturday, October 13. You can leave your own failure story on their site (I did). Or arrange a local event. How could you go wrong by celebrating failure and, especially, learning from it?

Hat tip to Tuuti Piippo
Posted by Unknown at 10:06 PM No comments:

Email ThisBlogThis!Share to TwitterShare to FacebookShare to Pinterest
Labels: about mistakes, celebration, failure

"Most failures are less impactful than they feel"

From a FailCon interview with Gleb Budman, CEO of BackBlaze, an online storage provider. The entire interview is great and I encourage you to read it on the FailCon site. But I couldn't resist this nugget:

Q: Best lesson learned on how to deal with failure?

Gleb: Acknowledge. Learn. Then move on. As entrepreneurs we aim to succeed, but know that we must take risks to do that and risk implies a chance of failure. When that failure happens – acknowledge that the team tried, but we failed. Learn what you can from the experience. (I sometimes even like to blog about it, such as about our “almost acquisition” post.) Then move on – most failures are less impactful than they feel.

Posted by Unknown at 5:30 AM No comments:

Email ThisBlogThis!Share to TwitterShare to FacebookShare to Pinterest
Labels: about mistakes, failure

How well is Apple handling its Maps fiasco? 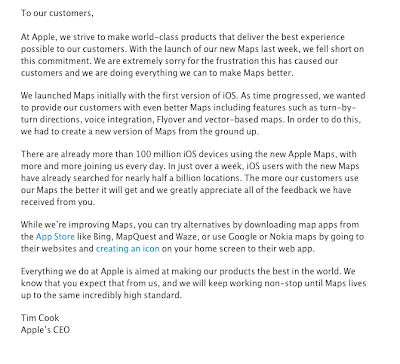 Apple's CEO, Tim Cook, posted the above letter to the Apple website last week, responding to a week of controversy over the iPhone's Maps application. Apple Maps, replacing a Google-developed app, was praised for its beautiful design and Flyover feature, but vilified for its geographic errors. David Pogue, the New York Times tech columnist, wrote of Maps, "It may be the most embarrassing, least usable piece of software Apple has ever unleashed."

Some commentators are already toting up the damage from the Maps mistake - very premature in my view. I'd prefer to look at Apple's actions regarding the situation using the framework from my 99u piece ("How to Bounce Back From a Big Mistake"), which will form part of the upcoming Mistake Bank book. Here are the main steps involved in bouncing back:

To their credit, Apple did not blame its users, or the tech press (which could have been accused fairly of piling on). The company is living with the consequences.

2. Fix it, and Make Sure Others Are Aware

There was no need to make sure people are aware of the Maps issue; it became worldwide news. As far as fixing the mistake, Apple cannot fix it immediately. It will take months if not years of updating. Cook is to be credited for advertising competitive solutions (including Google's) as replacements for Maps v1.

The letter is a nice example of a legitimate apology. If you don't think that's difficult, check out former US Press Secretary Ron Ziegler's attempt.

4/5/6. Reflect, decide what you'll do differently in the future and share that knowledge

It's too early for these steps to be taken yet, but I would hope that Apple learns as much as they can from this episode and puts it to use. There's a lot we don't know, including whether Apple was essentially forced to rush out its own Maps because of actions by Google to withhold access to its own app, or to starve the iPhone app of features to favor its own Android platform. I can tell you from experience that ending significant partnerships often creates havoc with products and customers.

At any rate, you'd expect a company like Apple to mine this big time - possibly to redouble their efforts to control their own destiny with key iPhone features.

What do you think Apple should learn from the Maps mistake?
Posted by Unknown at 5:30 AM No comments: